Thailand’s Special Economic Zone policy is intended to contribute to the economic of the less developed border regions to improve the livelihoods of their citizens. However, the process of the acquisition and development of the public land acquired for SEZs in Thailand has been shown to be controversial with a broad range of conflicts occurring between local people and authorities over their implementation. Decision-making mechanisms about SEZs in Thailand have been criticized for not allowing sufficient opportunities for local people to participate. It has been suggested that this results in increased social and environmental impacts and developments which do not meet local needs. 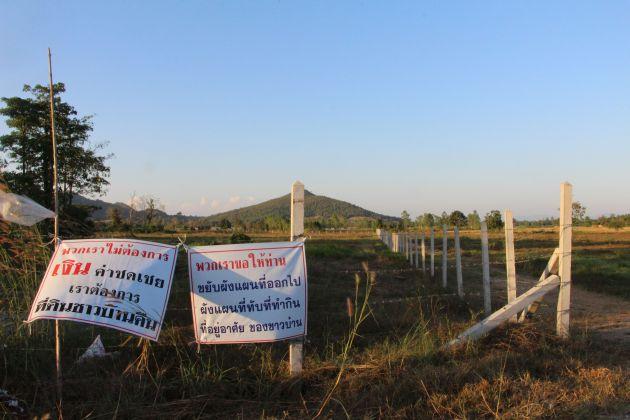 The SEZ policy aims to identify underutilized public land resources, such as degraded forests or informal residential areas and use incentives to attract investors willing to develop them. Once identified, these areas are designated as state-owned land, enabling the Treasury Department to issue new land ownership documents for approved uses to other government agencies or the Industrial Estate Authority of Thailand or the private sector to improve socio-economic outcomes.1

This land is then allocated by government agencies to investors, balancing these incentives with a range of specific negotiated conditions about the nature of economic development in the zones and the expected public benefit. However, the experience in Thailand suggests that these negotiations have often failed to reach consensus with local people, resulting in conflicts that limit the social, economic and environmental sustainability of these zones.

This increases the risk of project delays and the intended benefits related to the SEZs being transferred to other regions. SEZ projects in Thailand have been known to push land prices in the regions based on speculation. This can act to limit the opportunities for local ownership of the initiatives.

There are a large range of social impacts related to the implementation of SEZs, such as land use conflicts and migrant workers, etc. Problems with the implementation of these zones produce winners and losers. In many cases local livelihoods have declined as a result on their development. The desire of new enterprises who invest in these zones to access cheap foreign labour often in contrast to the needs of local people for attractive employment opportunities. Also, when public land is acquired by the government to designate to new SEZs local people can lose their access to common pool resources and their existing economic activity can be impacted.

Thailand has about 3.59 million migrant workers in 2017 (equivalent to 5.6 percent of the population, or 9.6 percent of total employment), which has been increased 3 percent from 2015, and estimated to increase during the promotion of SEZs along the border provinces. The majority of migrant workers to Thailand come from neighboring Myanmar, Lao PDR, and Cambodia. The Thai Government is intent on regularising their status and providing social services, but the systems are far from perfect. More than half of Thailand’s migrant are undocumented migrants and vulnerable to human trafficking. With the economic and development progress as a result of ASEAN Economic Community (AEC) and border SEZs, there is increasing concern over the possibility of an escalation in human trafficking.2 Migrant rights and labour conditions are monitored closely by NGOs and migrant rights organisations to ensure labour laws are implemented.

As the government wants to accelerate development of the special economic development zones in Thailand, a range of environmental impacts, towards reserved forests, water and air quality, and waste management, have also been recognized.

The increased demand for land to develop infrastructure as a result of SEZ policies has increased the pressure on forests and agricultural areas. Forested land allocated for infrastructure development as a result of SEZ policies has been chosen from both forest reserves and areas considered to be degraded forests. There are cases where this land has been viewed before these allocations as public land.

These allocations are controversial because they enable government agencies and the private sector to plan land use changes, without considering existing forest ecosystems or  local uses. These situations often lead to conflict, for example:

Land use management has a significant role in the managing the quality of water resources.3

Industrial development through SEZs often leads to industrialization and urbanization of natural areas. This leads to pressure on water resources from competing uses, which need to be managed. SEZs can therefore affect the availability of water for agriculture, domestic water supplies, as well as the environment. It is expected that several SEZs are likely to contribute towards water scarcity in the future.

Increased emissions are also expected from urban and  industrial growth associated with SEZs. This includes increased greenhouse gas, particulate (PM10) and volatile organic compound (VOCs) emissions.4 This has been observed to have the following impacts on the health of local people.

Increasing urbanization and industrialization in SEZs leads to increasing pressures on  ecosystems. The rapid growth of industrial development and tourism generates increasing amounts of solid and hazardous waste that is beyond the current capacity urban environments to treat effectively.

All provinces in the SEZs are vulnerable to issues related to pollution, such as the accumulation of solid waste and sewage in areas of the city. SEZ development needs to focus on the treatments and removal of solid waste. A variety of waste management sites should be planned incorporating small, clustered waste collection areas linked to larger waste disposal sites.5

According to a 2016 report on municipal waste management in Thailand, many provinces face problems with the accumulation of solid waste, which become worse, when  SEZs are implemented. This report shows that provinces where SEZs have been implemented generally have the largest volume of undisposed solid waste. This is particularly prevalent in the SEZ and Eastern Economic Corridor, particularly Chachoengsao, which had accumulated 1,242,000 tons of undisposed waste in 2016.6