Sustainable Development Goal 14 aims to “conserve and sustainably use the oceans, seas and marine resources for sustainable development,” a goal which is important to a country such as Thailand, which is bordered by two oceans – the Pacific and the Indian.1 Progress towards SDG 14 is being measured against relevant targets and indicators, which can be seen viewed on the OD Mekong page, and which will all need to be reached for Thailand to successfully achieve SDG 14.

These targets were developed by the Inter-Agency and Expert Group on SDG Indicators (IAEG-SDGs) and were agreed to by the international community in March 2016.2 The targets and indicators for SDG 14 span a range of issues related to ocean, sea and marine resources, and they attempt to lead broad-based sustainable development of marine resources in Thailand and globally.  Some targets, such as 14.1, which aims to reduce marine pollution such as plastic, are already high on the political agenda.3 Plastic recently made the news across Thailand following a dead pilot whale washing up on a southern Thai beach, having died because of consuming too many plastic bags, which led to public outcry about plastic pollution. Other indicators are more technical and less in the public eye, such as indicators 14.6, which looks to prohibit certain types of subsides.  Nonetheless, all indicators will have to be achieved if Thailand’s efforts to achieve SDG 14 are to be successful.

Thailand has many reasons to invest in their oceans and marine environments, having more than 3,148 km of coastline which runs across 23 provinces.4 These marine environments are ecologically diverse and are home to about 25% of the world’s fish species.5 The country’s economy, accordingly, is closely tied to its marine environments, with coastal areas having played a major role in Thailand’s economic development. Tourism, in particular, is dependent on sustainable management of coastal areas, with tourists desiring abundant wildlife and clean beaches during their visits to the country.  In addition, Thailand’s oil and gas industry, as well as its fishing and seafood industry – one of the world’s largest – are located in coastal regions.6

“If we do not take care and face up to these multiple assaults, we will face growing crises in the not-so-distant future.” Jeffrey D. Sachs, Director, Earth Institute, in reference to the threats facing the world’s oceans.

Sustainable management of Thailand’s coastal areas faces many challenges. Unsustainable fishing practices are one area where significant progress still needs to be made, as bottom trawling, and illegal, unregulated and unreported (IUU) fishing, have devastated Thailand’s fish stocks and marine environments.  IUU fishing is one of the greatest threats globally to marine environments as the practice prevents effective monitoring of fish and wildlife stocks, thereby making effective fishery management difficult.7 Those engaging in IUU fishing also are known to frequently use unsustainable fishing techniques, such as bottom trawling, which can cause significant lasting damage to marine ecosystems, often resulting in long-term, or at times irreversible, negative impacts.  Many of Thailand’s coral reefs have suffered greatly as a result, substantially reducing the area covered by coral.8

Thailand has made efforts to reduce IUU fishing in recent years, efforts which appear to be having some success.9 The European Commission (EC) in 2015 issued Thailand a ‘yellow card’ due to their perceived lack of effort in combating IUU fishing, but has since noted improvements in the situation. While Thailand has yet to be issued a ‘green card’ by the European Commission, both EC and Thai Authorities have publicly noted that substantial progress has been made in reducing IUU fishing since the issuing of the yellow card in 2015.

Corruption is also a major concern, and is one factor allowing IUU fishing to continue. Additionally, illegal wildlife products, many of which originated from Thailand’s marine environments (ex. fish bladders, some types of shark fin, abalone, sea cucumber), continue to be sold in or trafficked from Thailand, a practice facilitated in some cases by corrupt law enforcement officials.10 Fisheries management has also been made more difficult, with corruption hindering efforts to improve labour practices in the industry and to accurately monitor the legality of fishing activities.

Plastic and other forms of waste entering into marine environments poses another significant challenge. Thailand is the world’s fifth or sixth largest contributor of plastic waste to the world’s oceans (according to different sources), a ranking disproportionately high given the size of Thailand’s population and the country’s level of development.11, 12 More than 1.03 million tonnes of plastic from Thailand are thrown away each year, 3% of which enters the ocean.  The average person living in Thailand uses 8 plastic bags every day, in large part as a result of pre-packaged food served in Thailand’s convenience stores and supermarkets, as well as Thailand’s ubiquitous street food vendors often using several plastic bags per meal they serve. 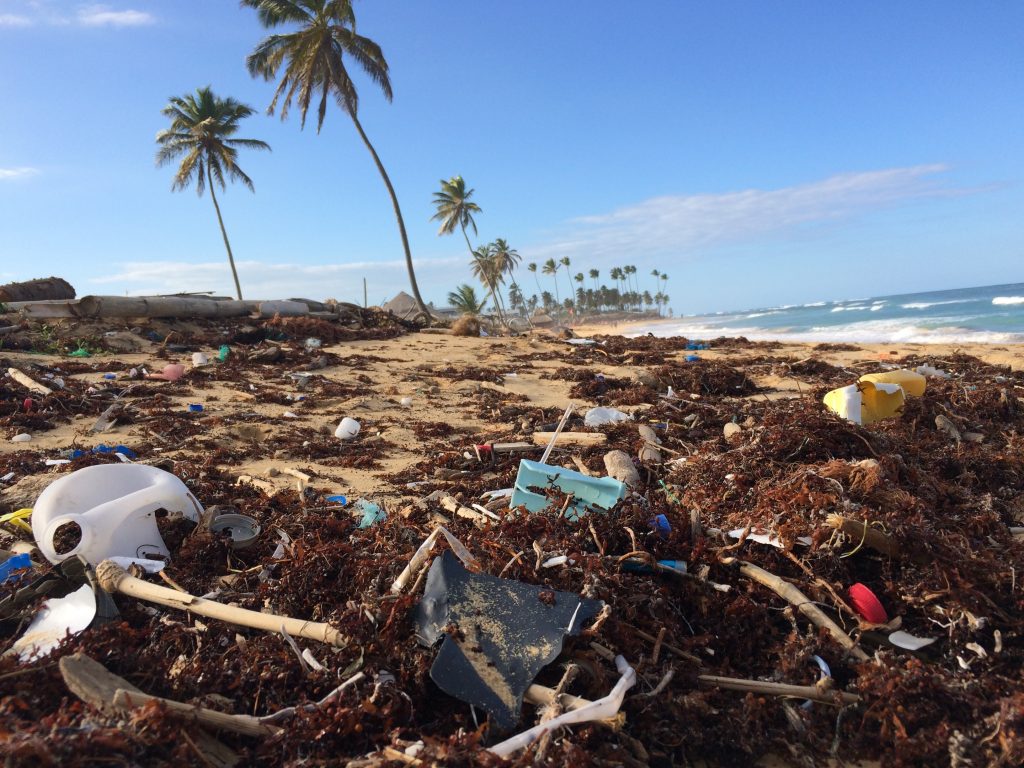 Industry along Thailand’s coasts also threatens marine areas in Thailand, with widespread reports of untreated wastewater and chemicals being released into the oceans in spite of government regulations prohibiting the practice.13 Since 2004 there have more than a dozen major oil spills and leakages, the long term effects of which remain unclear. These spills often have an immediate impact on tourism though, discouraging tourists from visiting Thailand’s beaches and coastal regions, and harming many local businesses.  A 2013 oil pipeline leak, for example, had a “extreme” impact on tourism according to Thailand’s Tourism Minister, as 50,000 litres of crude oil filed the waters around the popular tourist destination Koh Samet.14

Tourism has also had a significant impact on Thailand’s coral reefs and marine ecosystems. A recent report from Kasetsart University found that coral reef damage grew from 30% to 77% over the previous decade and that this is “mainly due to pollution from the tourism industry.”17 Hotels, resorts and beachfront houses pollute the water in front of them, often where coral is located, causing significant damage, the study found. Plastic pollution and landfills located near the coasts were also cited as reasons for the deterioration.  A major Thai tourist destination, Maya Bay, recently had to close to tourists after becoming a “cesspool” due to environmental damage as a result of tourism, highlighting the severity of the problem.18 The closure plans to last four months, with the hope that the beach, located inside Hat Noppharat Thara-Mu Phi Phi National Park, will be “rejuvenated” afterwards.

The Thai government has been making efforts to protect its marine environments and while marine and coastal resources remain in deteriorating condition, some progress has been made towards reducing environmental damage to marine areas.19 One point of progress has been that mangrove forest area increased from 2,333 km2 in 2004 to 2,445 km2 in 2014, a slight, but notable, increase.

Similar provincial level committees were also initiated by the act.20

Various programmes have also been initiated to expand marine protected areas, minimize the impacts of ocean acidification and protect biodiversity in coastal regions.

The Thai Government’s 2017 VNR also directly addressed their efforts to combat IUU fishing, stating that the government “spares no effort to address the concerns by reforming and modernizing its fisheries sector in compliance with international rules.”21 Specifically, they created the Command Centre for Combating Illegal Fishing to coordinate efforts to reduce IUU fishing, as well as adopting the National Plan of Action to Prevent, Deter and Eliminate Illegal, Unreported and Unregulated Fishing 2015 – 2019 and the Marine Fisheries Management Plan 2015-2019. These frameworks aim to reduce overfishing in Thailand through measuring including:

Innovations to protect Thailand’s coastal areas are already occurring.  Prasan Sangpaitoon, a Thai researcher, for example, has found a way to encourage the growth of new coral reefs through using PVC pipe as breeding grounds for new coral.23 Through using a durable, non-corrosive material Prasan has been able to insert coral fragments into openings in the pipe, where it can grow.  The process is inexpensive, with each frame costing only about 500 baht. The project was initially launched in Chonburi province but after initial successes has since expanded to Koh Kham, Koh Samet, Koh Wai and Koh Talu. This project is one of several working to resource coral reefs in Thailand, with numerous partnerships between academia, communities and the private sector working to develop new ways to protect and restore Thailand’s coral.24 Rambhai Barni Rajabhat University, for example, has also transplanted more than 40,000 corals around islands in Eastern Thailand.25

Efforts to restore Thailand’s mangroves are also underway. Ban Pred Nai village, for example, is a model village working to demonstrate how successful mangrove restoration can occur.26 The village had lost many of its mangroves to commercial prawn farms in the 1980s, causing a rapid decline in local fish stocks and increasingly polluted water.  This caused economic hardship for villagers, many of who earned income through fishing, leading them to work to restore the mangroves in their community. The project uses a set of community specific rules on sustainable use of marine environments, as well as low-interest loans and welfare programs to encourage sustainable use of coastal areas. These programmes were accompanied by education about the value of mangroves and how to restore them.  The project was a success, with neighbouring villages joining the scheme after seeing the benefits brought to Ban Pred Nai.

Despite these efforts there have been calls from civil society groups for more stringent regulation of the fishing sectors and renewed efforts to protect Thailand’s coastal areas.27 Calls have been made for a reduction of untreated sewage and industrial waste entering the oceans and for efforts to reduce the amount of garbage and plastic waste finding its way into the ocean. Additionally, stronger efforts to protect Thailand’s remaining mangroves, the rehabilitation of former mangrove areas, as well as an end to land reclamation projects along the coasts have been suggested. The empowerment of small scale fishers, rather than support for industrial fishing, has been put forward as a way to improve fisheries management.  Finally, there have been calls for more research into how to reduce the impacts of ocean acidification and to increase knowledge about Thailand’s marine ecosystems, knowledge that could be used to better protect remaining marine resources.

Read more about Thailand’s Civil Society’s response to the SDG’s.