In 2016, Thailand was ranked 20th globally in terms of carbon dioxide (CO2) emissions, producing 0.9% of global emissions or 327 tons of CO2 annually. This corresponds to a per capita CO2 emission rate of 4.7 tons, which is slightly lower than the global rate of 4.8 tons.1 Population and the size of the national economy are reported to be the two major drivers of these figures globally. 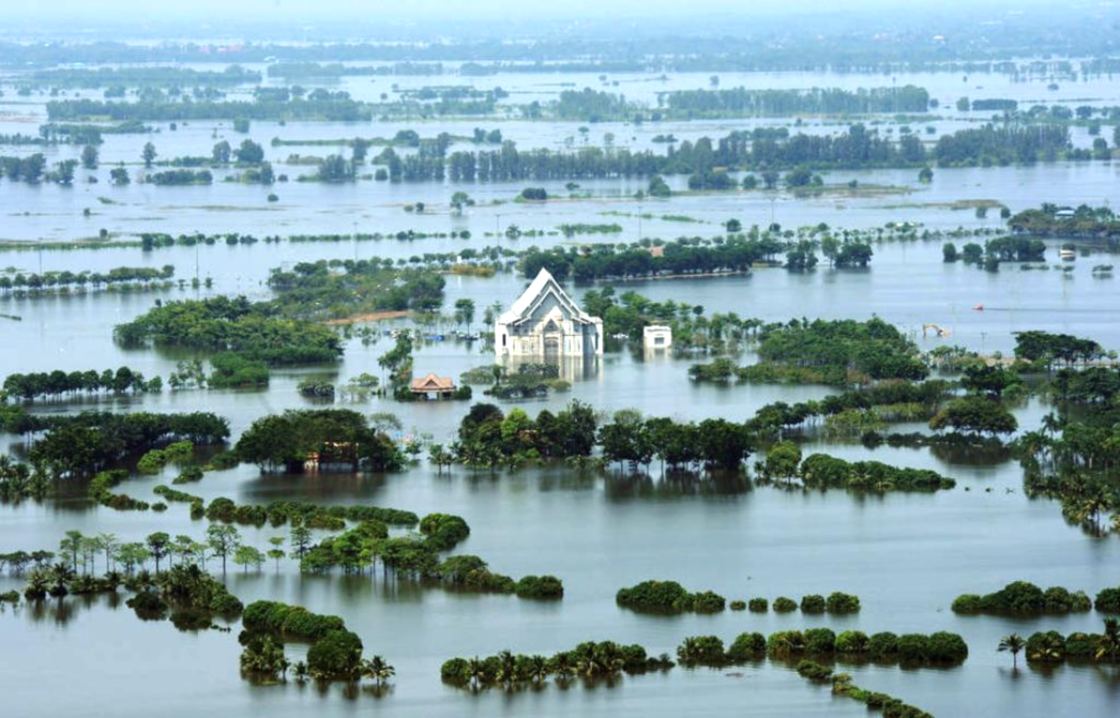 The impacts of climate change are already evident around the world. Thailand, as part of the Mekong River Basin, is struggling to deal with these impacts, which result in part from ecological pressures introduced by large hydropower dams, deforestation, coastal erosion and urbanization. Currently, Thailand is home to a population of about 70 million and is particularly vulnerable to extreme weather events, such as floods and droughts, which are becoming more frequent and severe as a result of climate change.

For example, in 2011 Thailand experienced its worst ever flood event on record, at a cost US$46 billion for repair and rehabilitation nationally; and US$8 billion in Bangkok alone. The impacts of the flood affected more than 13 million people and resulted in over 680 deaths.2

More recently, the National Hydroinformatics and Climate Data Center (NHC) recorded a significant period recurrent and prolonged droughts between 2015 and 2016 that led to critically low levels of water in reservoirs nationwide. In 2016, these droughts significantly reduced the length of the growing season, as well as agricultural yields. Furthermore, in a economic study, focusing on trends in extreme weather conditions along the Chao Phraya river basin, it was projected that in the next two decades, extreme droughts could create conditions for dry season irrigated rice production, where total production levels would be reduced by 30.9%.3

Sea-level rise (SLR) is another impact resulting from climate change, which threatens livelihoods in coastal communities. For example, saltwater intrusion has caused a significant decline in rice yields in the Upper Gulf of Thailand, contributing to the vulnerability of mangrove forests, and degraded coral reefs. These impacts have affected the ecosystem services provided by these natural resources as well as in the fisheries in this region and the livelihoods that depend upon them. Research has shown an increase in the local mean sea level of 5 mm/year over the last 25 years in this region can be attributed to land subsidence at the river mouth and if this phenomenon is not addressed, severe coastal recession may occur in the Upper Gulf in the near future.5

Furthermore, Bangkok, the capital city of Thailand has been identified as a city as particularly vulnerable to climate driven impacts, such as flooding due to both SLR and extreme rainfall events. For example, a case study assuming a scenario of the climate warming by 4°C, without adaptation measures being applied predicts severe flooding in Bangkok. Under these assumptions, 40% of the city would be inundated by extreme rainfall event and a 15 cm SLR by the year 2030. Furthermore, the same event in the 2080’s would inundate 70% of the city with an 88 cm SLR.6

Deteriorating environmental conditions have the potential to exacerbate existing social issues such as political unrest, poor economic conditions, food insecurity, inequality, or poverty and cause widespread destruction of livelihoods. According to the long term Global Climate Risk Index produced by the GermanWatch think tank, Thailand had the 10th highest vulnerability and exposure to climate risks for the 20-year period between 1996 and 2015, at the time the report was released was ranked 53rd out of 181 countries on these terms.7

The potential magnitude of the economic impacts related to climate change may have on at-risk resources, such as rural and urban infrastructure, the productivity of workers, crop production, hydropower dams, or the provision of ecosystem services is a major concern. Conventional studies, such as the Climate Vulnerability Monitor8, estimate the net economic cost of climate change for Thailand at US$180 billion/year averaged between 2012 and 2030. However, figures at this time scale do not interact well with climate models. Alternatively, a Values-at-Risk analysis can show results that suggest that reduced labor productivity is the most the significant cost associated with climate change in the Lower Mekong Basin. It also suggested that Thailand’s economic risk associated with all climate change impacts, including infrastructure, is equivalent to 14% of total rural GDP.9

Working collaboratively with other countries to stabilize the global climate is a major challenge. Thailand has taken a number of steps to shape a policy agenda for enhancing climate resilience.

Ahead of 2015 Paris Agreement, Thailand submitted an Intended Nationally Determined Contribution (INDC) plan. The plan included a 20-25% reduction in greenhouse gas emissions from the projected business-as-usual approach by 2030.10

National institutions, such as the Office of the National Economic and Social Development Board (NESDB) and the Office of Natural Resources and Environment Policy and Planning (ONEP), have implemented climate change  mainstreaming into planning and budgeting functions of government. Key national strategic policies to address climate change include:

The 12th NESDB is informed by Thailand’s Twenty-Year National Strategy Framework (2017-2036)12 and complies with the 2015 Paris Agreement. Thailand has also chosen to adopt the Sufficiency Economy Philosophy13 of His Majesty the late King Bhumibol Adulyadej, Rama IX as the pathway to achieve the 17 UN Sustainable Development Goals and has developed the Thailand 4.0 policy model as a means to translate these plans into action.14

The  Climate Change Master Plan (2015-2050) was developed by the ONEP, under the direction of the Ministry of Natural Resources and the Environment as a continuous framework of integrated policies and action plans relating to climate change. The plan lays out a vision to achieve climate-resilient and low carbon growth in line with the SDGs by 2050. Thailand’s National Adaptation Plan (2015-2023) is currently being drafted and in the process of establishing a work plan. 15