Thailand is a country rich in natural resources, which have played a significant role in supporting local livelihoods and driving economic growth. Forests, watersheds, marine environments, and mineral resources have all been instrumental in supporting the Thai manufacturing, export, and tourism industries. However, rapid economic development over the past several decades has often occurred through the unsustainable exploitation of these natural resources. Economic priorities have often taken precedence over conservation in many cases.1 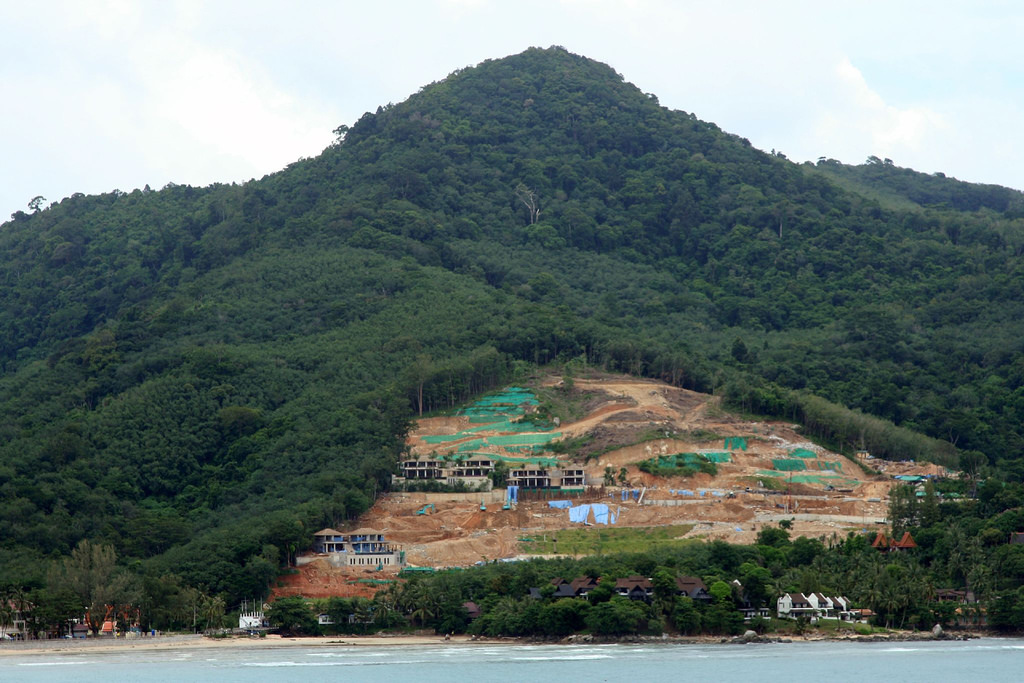 In Thailand, it has been estimated that applying green growth policies5 that understand these trade-offs, may be worth US$2.06 billion to the national economy in terms of the potential to enhance the net present value of ecosystem services supplied by forests, wetlands, mangroves and coral reefs. This represents a 7.8% increase in economic growth when compared to a ‘business as usual’ scenario. The largest benefit to be realized from these policies is associated with water quality improvement and flow regulation services. For example, modeling the outcomes of protecting the ecosystems that provide these services suggest an 8.4% improvement from these policy changes alone.6

In 2016, Thailand was ranked 20th in terms of national CO2 emissions, which accounted for around 327 metric tons, or 0.9% of global emissions. This corresponds to a slightly lower per capita emission rate (4.7 metric tons) than the global average (4.8 metric tons).7 Thailand’s moderately carbon intensive economy contributes signficantly to a high country ranking (9th out of 140 countries) in the Global Happy Planet Index. This suggests that Thai people have had some success at building a sustainable economy that delivers a relatively high level of well-being (6.3 out of 10), moderate life expectancy (74.1 years) moderate inequality (15%), without requiring a large ecological footprint (2.7 global hectares/person). 8

Thailand’s environmental values also attracts tourists, who provide a substantial contribution to the national economy. However, the rapid growth of this industry has also resulted in adverse environmental impacts. Natural resource depletion and environmental degradation associated with tourism poses many problems and improved management is required.

Thailand’s landscape comprises a wide range of habitats that support diverse flora and fauna populations. For example, at least 15,000 plant species have been identified in the country.9 Thailand is home to 15 distinct mountain ranges and 25 major watersheds connected to the Mekong River, Gulf of Thailand, and Andaman Sea. These support a broad distribution of plant species, as well as three dominant types of tropical forest (monsoon forests, rain-forests and mangrove forests).

Globally, Thailand has a moderately high level of biodiversity. However, this biodiversity has long been threatened by the exploitation of its natural resources without considering the sustainability of their use.10 Many taxonomic species have been listed on the IUCN Red List of Threatened Species as endangered, with some listed as critical and at risk of extinction if action is not taken to save them. For example, in 2016 Thailand had 58 threatened mammal species, 54 threatened bird species, 106 threatented fish species and 152 threatened plant species on this list, which is comparatively high compared to other countries in the region.11

In 2015, the FAO reported that the percentage of land areas covered by forest was approximately 32.1% of total land area in Thailand.12 Improving this figure has been a part of the national agenda for some time.  For example, the National Forest Policy (1985) outlined an aim to maintain forest cover at 40% in the 6th National Economic and Social Development Plan (NESDP) (1987–1991). This has been the target since that time and was more recently reiterated in the 11th NESDP (2012-2016). For the past several decades, several deforestation drivers have prevented Thailand from reaching the achievement of this outcome including: illegal land clearing and encroachment on forests, resort development projects, mining, and the construction of roads and hydropower dams.13

A major form of forest degradation occurred between 1975 and 1993, when the area of mangrove forests in Thailand was almost halved. The primary reason for this was large-scale encroachment of aquaculture ponds for intensive shrimp production into forested areas.14 Mangrove forests in Thailand are a crucial component of coastal ecosystems. About one-third of coastal areas in Thailand are bordered by mangrove forests. They provide food sources, nursery grounds, and habitat for various animals, as well as natural resources for Thai people, such as fisher folk, shrimp farmers, and charcoal producers who benefit from these productive ecosystems. 15 Between 2000 and 2012, the rate of mangrove deforestation decreased significantly. However, Thailand is still one of the largest aquaculture producers in the world and the small areas of remnant mangroves in the country have needed to be heavily protected to mitigate further negative impacts.16 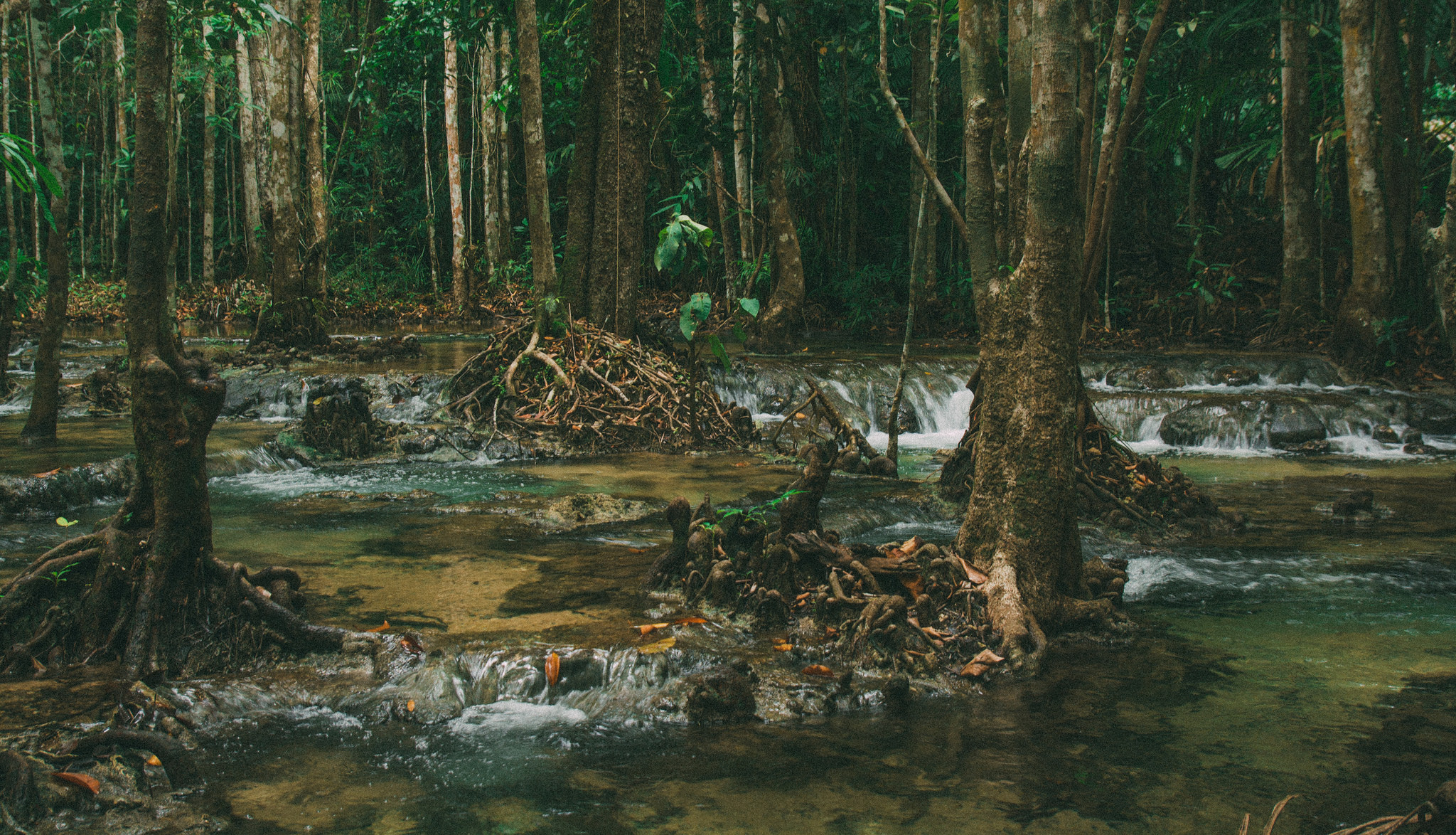 In 2014, 18.8% of the total terrestrial area of Thailand was classified as a protected area, which is higher than the world average of 14.8%.17 Awareness of the need to conserve natural resources to address environmental problems for continuing Thailand’s economic development has improved steadily. One key policy achievement was the imposition of a total logging ban in natural forests in January 1989. This was followed by the development of new forest conservation policies to enhance the protection of remaining forestry resources.18

Thailand possesses abundant water resources, however the volume of renewable internal freshwater resources per capita has reduced from about 7,700 m3 per capita in 1962 to about 3,300 m3 in 2014, closely related to growth in population, as seen in the graph below.19 This represents increased water scarcity contributing to prolonged dry seasons  in Thailand.

One major factor in this change has been the development of irrigation schemes, which has been essential to the development of Thailand’s domestic and export agricultural industry to provide livelihood opportunities for Thai citizens. However, rainfall storage in Thailand averages only 30% of total rainfall volume, with shortages often occurring at the time when agricultural demand is highest. This has become a critical issue that has worsened over time. 20

This in turn has been a major factor in the decline in quality and quantity of water resources in aquifers and watersheds. For example, wetlands located in peri-urban areas in Thailand have become increasingly degraded through drivers such as their conversion to rice paddies, urban and industrial development, and pollution from industrial run off and pesticides.21

While Thailand has not recorded a significant change in overall rainfall with a changing weather conditions, there has been diverging trends for precipitation in different parts of the country. For example, Central and Eastern Thailand have become significantly drier and the North East and Gulf regions, including Bangkok have become wetter.  Climate change has resulted in more extreme weather events, including long, hot dry spells and flash floods and tropical storms, which have become more frequent and intense.22

In Thailand, conservation policies and regulations were reviewed with a focus on environmental sustainability as part of the 7th National Economic and Social Development Plan (1992–1996). This plan placed the protection of the environment as a major priority of the Thai government. It was aligned with the development of the Enhancement and Conservation and National Environmental Quality Act (1992).23 The aim of this legislation was to reform natural resources management and environmental conservation practices in Thailand, based on effective, transparent and accountable monitoring. The Act was used to enhance public participation through decentralized management processes led by local authorities, adhering to ‘polluter pays’ principles.24

Moving to the current situation, the 12th National Economic and Social Development Plan (2017–2021),25 has now evolved toward stated goals of “stability, prosperity, and sustainability” for the economy, society, and natural resources through a “sufficiency economy” philosophy. Environmentally-friendly “green growth” for sustainable development is one of the key approaches intended to align with the 2030 Agenda of the UN Sustainable Development Goals.

As part of this agenda, the Thai National Assembly has also developed a 20-year National Strategy (2017–2036),26 which is being used by relevant line ministries such as Ministry of Natural Resources and Environment to developed policy frameworks that enable more sustainble environmental outcomes. An example of this is the National Environment Quality Management Plan (2017–2021).27 This policy highlights four main components related to natural resources management in Thailand, including environmental quality management, protection and rehabilitation of natural resources, increased efficiency of natural resource use, and international cooperation on climate change.

Thailand also complies with other global policy frameworks,28 including the Global Strategic Plan for Biodiversity 2011–2020 and the Aichi Biodiversity Targets. Thailand intends to use these frameworks to meet international obligations to agreements such as the Convention on International Trade in Endangered Species of Wild Fauna and Flora (CITES), and the Ramsar Convention on Wetlands.

Under the leadership of Prime Minister General Prayut Chan-o-cha, Thailand’s 4.0 policy is aimed at realising a livable society that possesses an economic system capable of adjusting to climate change and achieving a low carbon society. At the same time, Thailand intends to use this policy to push toward the goal of being a high-income country category.29 The challenge of progressing from a upper middle classification will involve the doubling of Thailand’s current GDP per capita from US$6,357 per annum to US$12,236 per annum30 by using forms of socio-economic development that do not degrade environmental resources. Prompt actions of tree conservation are required for the future generations.31

Related to Environment and Natural Resources